In Tehran, murals depicting men who died in the Islamic Revolution of 1979 and the Iran–Iraq war of 1980– 1988 are ubiquitous. The murals represent an exercise in state propaganda, serving to remind citizens that these men died not simply for the nation but for Islam; they are martyrs. This message resonates with deeply held religious views in Iran. There is constant reference to the Battle of Karbala and the martyrdom of Imam Hossein, the grandson of the Prophet Mohammed. This is seen to prefigure the revolt of the people against the Shah in 1979, the defence of the Revolution against Saddam Hussein in the 1980s and, furthermore, the claim of the Iranian opposition that the ideals of the Islamic Revolution have been distorted by politicised clerics. In propagating the myth of Karbala, the murals function to control the masses, bolster elite power and marginalise opposition to that power. 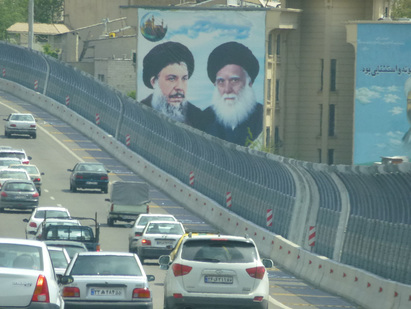 Mural in Tehran. On the left, Muhammad Bagher Sadr, cousin of Imam Musa, and on the right, Sadreddin Sadr, Imam Musa's father. Iranian-born Shia cleric Musa al-Sadr was founder of the Lebanese political group Movement of the Disinherited whose armed wing was Amal. He disappeared in 1974 on a visit to Libya, possibly killed on Gadaffi’s orders. Iraqi Shia leader Mohammad Sadeq al-Sadr, father of Musa, was killed on the orders of Saddam Hussein in 1999. 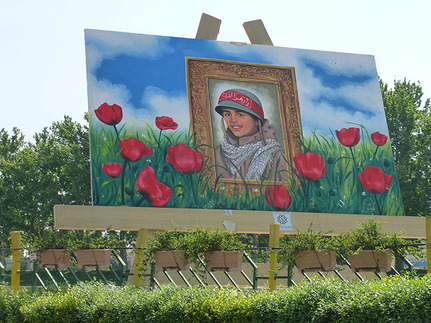 Mural in Tehran. Muhammad Husayn Fahmida, the 13-year old martyr of the Battle of Khorramshahr, 1981. 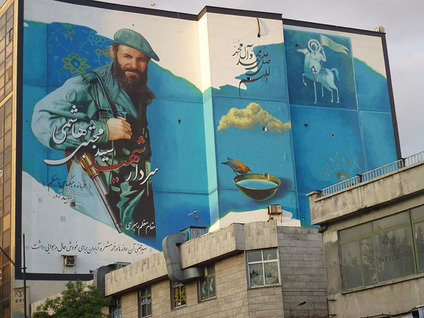 Mural in Tehran. The martyr Seyyed Mujitaba Hashemi, a commander during the irregular wars in Kurdistan in 1985, and, top right, Imam Hossein on horseback. The accompanying caption states: ‘Our God, we send greetings to the Prophet and his family.' 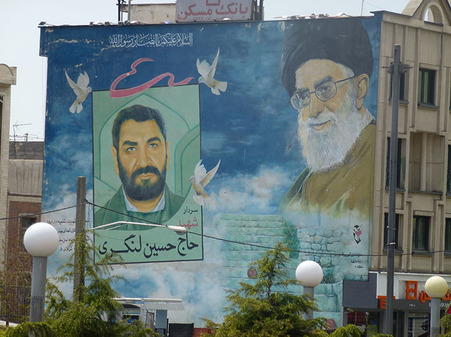 Mural in Tehran. The war martyr Haj Hussein Langari and the Supreme Leader, Ayatollah Khameinei. The accompanying text reads: ‘Blessings be upon you who are the assistants of Allah’s Prophet’. 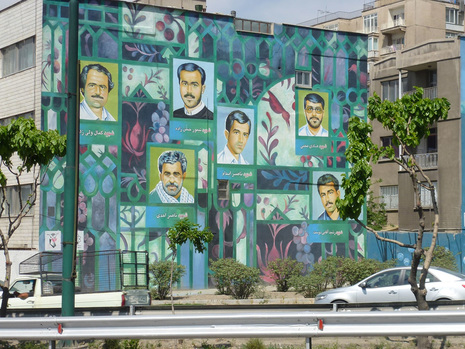 Mural in Tehran. Six martyrs. The only accompanying text gives the names of the men portrayed. 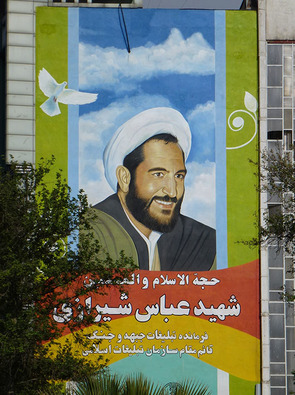 Mural in Tehran. Abbas Shirazi, Vice-President of the Islamic Propaganda Organisation, Commander of War Propaganda, cleric and martyr in the Iran-Iraq War, 1984. 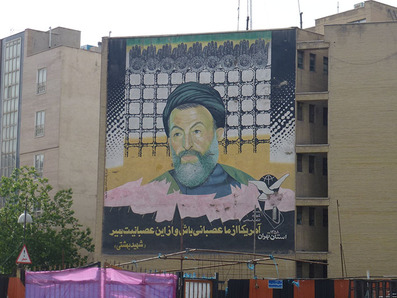 Mural in Tehran. Ayatollah Behesti, head of the judiciary, martyred by the Mojahedin-e Khalq bomb in 1981. The accompanying text quotes Behesti at the time of the takeover of the US embassy in Tehran: ‘US, be angry with us and die in your anger.' 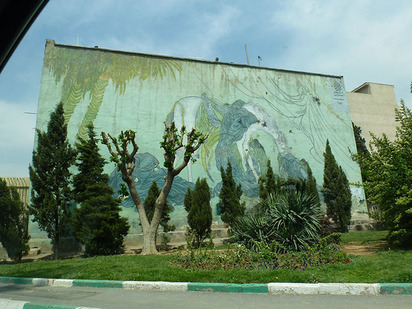 Mural in Tehran. Reproduction of Mahmoud Farshchian’s painting ‘the Evening of Ashura’. 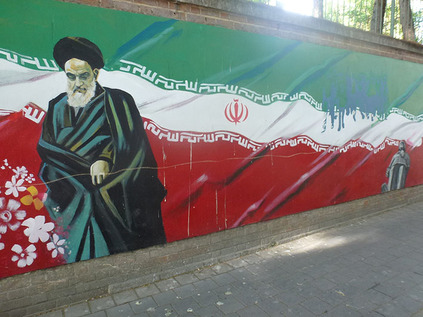 Mural in Tehran. Ayatollah Khomeini with Iranian flag in background. 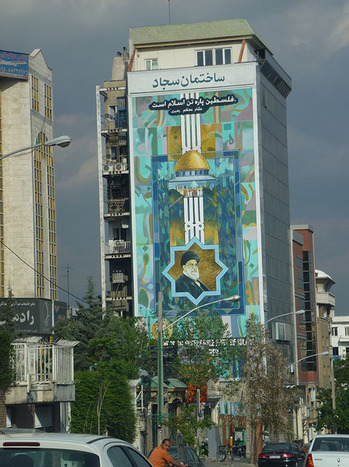 Mural in Tehran. The Dome on the Rock in Jerusalem and statement from Ayatollah Khameini (portrayed): ‘Palestine is a piece of the heart of Islam’. 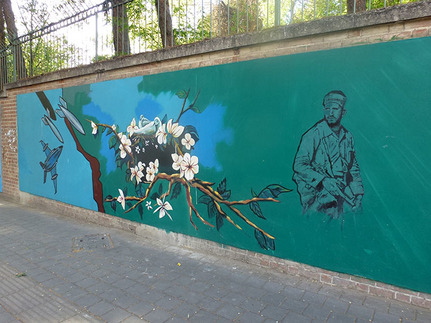 Mural in Tehran. Iranian soldier, and doves’ nest under attack from rockets fired from a US jet. 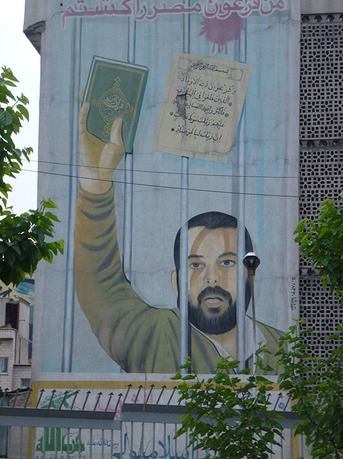 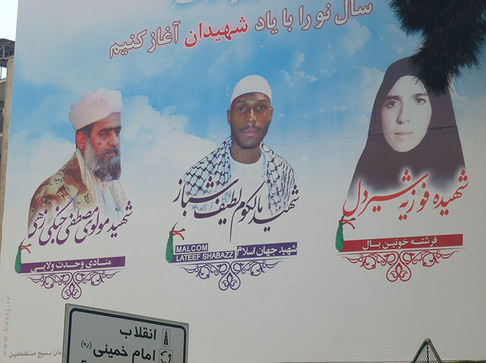 Visual display in Tehran. ‘Martyrs of the year’: Fouzieh Shirdel, a nurse martyred in Paveh, Kurdistan in August 1980, along with Malcom Lateef Shabbaz (in the middle), grandson of Malcolm X, who was murdered in Mexico City in 2007, and Moulavi Mostafa Jang Zehi (on the left), a prominent Sunni cleric, known for his efforts in uniting Shia and Sunni in Baluchistan province in Iran; he was murdered in 2012 and a number of Sunni clerics and activists were later found guilty of the offence. 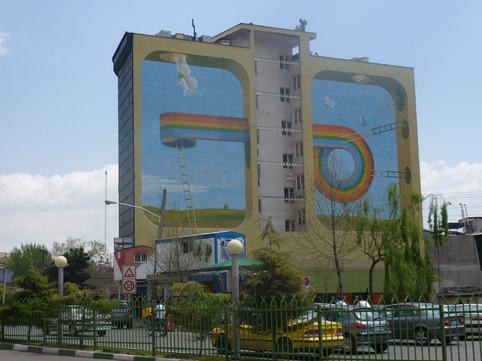 Mural in Tehran. Beautification mural, with the martyr represented as an angel.