The Mural Hunter and The Writing on the Wall

The murals of Northern Ireland are an expression of the region's violent Troubles. 'The Art of Conflict' examines these murals through their painters and the people who live there, exploring this unique street art's impact, purpose, and future. 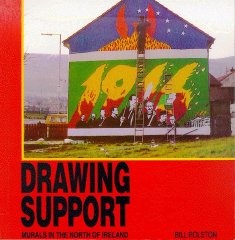 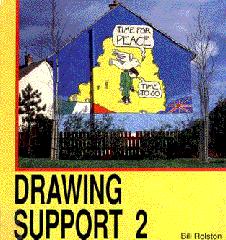 The Story So Far
The Story Continues: Loyalist Murals
Republican Murals in the 1990s
http://cain.ulst.ac.uk/bibdbs/murals/rolston2.htm

A Collection of Contemporary Murals in Northern Ireland,
Compiled by Bill Rolston (1998)
http://cain.ulst.ac.uk/bibdbs/murals/rolston.htm

Danny Devenny and Mark Ervine are two muralists from opposite of the political divide. Together they are crossing the sectarian boundaries of Northern Ireland, bringing with them a positive outlook for the future with the murals they paint.

To mark the launch of Open Hands, a Belfast cross-community initiative, volunteers from different backgrounds come together to create anti-discrimination mural in a significant area of Belfast in an effort to set an example of hope for a better future in their local communities. "We can bridge gaps, and cover spaces that have been between us." - Bill Rolston.

The Liverpool Mural Project brought Danny Devenny and Mark Ervine from Belfast to work together on a mural of John Lennon Liverpool's 2008 European Capital of Culture year. They later painted a mural celebrating the links between Liverpool and Ireland.

A Directory of Murals in Northern Ireland