In 1997 I managed to go into Long Kesh/the Maze Prison on a number of occasions. This is the prison where the republican hunger strike in 1981 led to 10 deaths as IRA and INLA prisoners advanced their demand for recognition as political activists rather than criminals and refused to wear the prison uniform. By the 1990s this battle had in effect been won by the republican prisoners; loyalist prisoners also benefitted from the liberal system which was now in place. I was able to enter the separate wings of each of the political groups - IRA, INLA, UVF and UDA - on a number of occasions to photograph the murals painted there. The only group which did not let me in was the LVF;  however, on a later occasion, after the prison was no longer operating as such, I did manage to photograph the LVF murals. On the basis of these visits, I wrote an article: 'Prison as a Liberated Zone: the Murals of Long Kesh, Northern Ireland', State Crime Journal 2(2) 2013: 149-172. The abstract to that article is as follows:

In Northern Ireland’s Long Kesh prison in the late 1980s and 1990s, prisoners from each of the loyalist and republican groups painted highly politicized murals on the walls in their respective wings. This article seeks to examine these murals as both a symbol and a means whereby the politically motivated prisoners sought to appropriate the space of the prison for their own purposes. Their resistance, expressed in this and other ways, was not merely to the pains of imprisonment, the stripping of individuality and identity which was at the heart of the prison system. Rather imprisonment was seized as an opportunity to advance political understanding and build revolutionary structures whereby the prison was seen as one more front in their respective wars – that of republicans against the British state, and that of loyalists against republican insurgence. Each in their own way, republican and loyalist prisoners created virtual “liberated zones” within the prison and in doing so prepared for political power and conflict transformation on the other side of imprisonment. 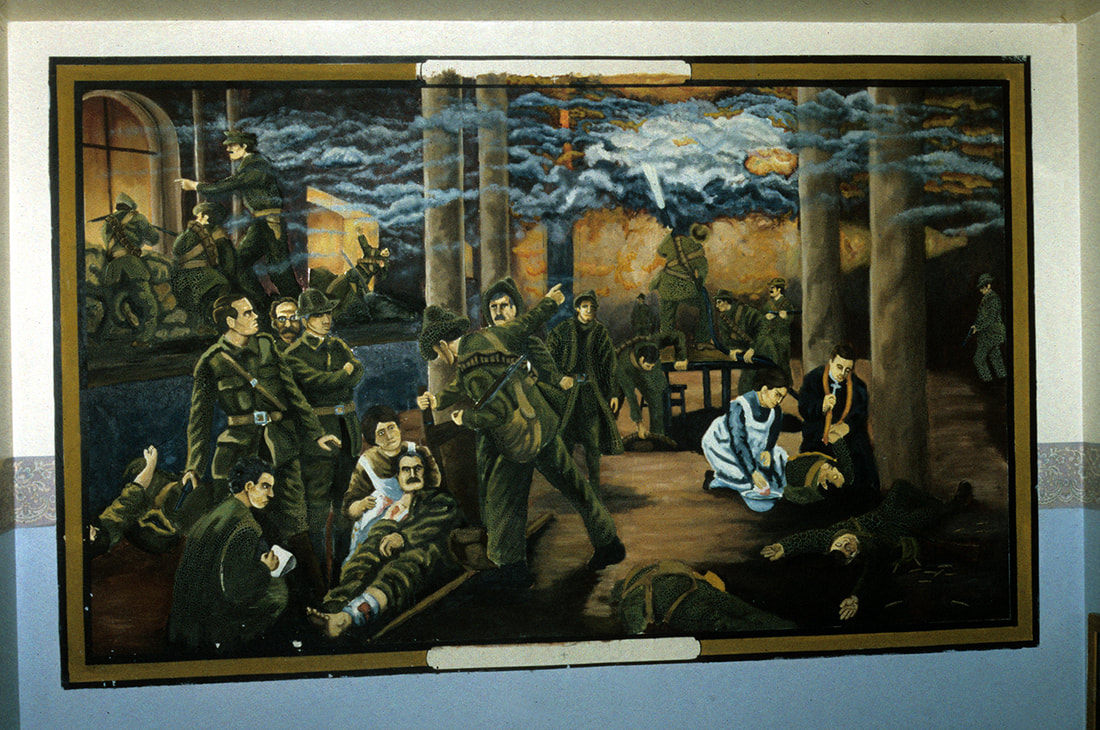 Patrick Pearse, a wounded James Connolly and other rebels in the GPO, Dublin, Easter 1916; mural in IRA wing of Long Kesh. 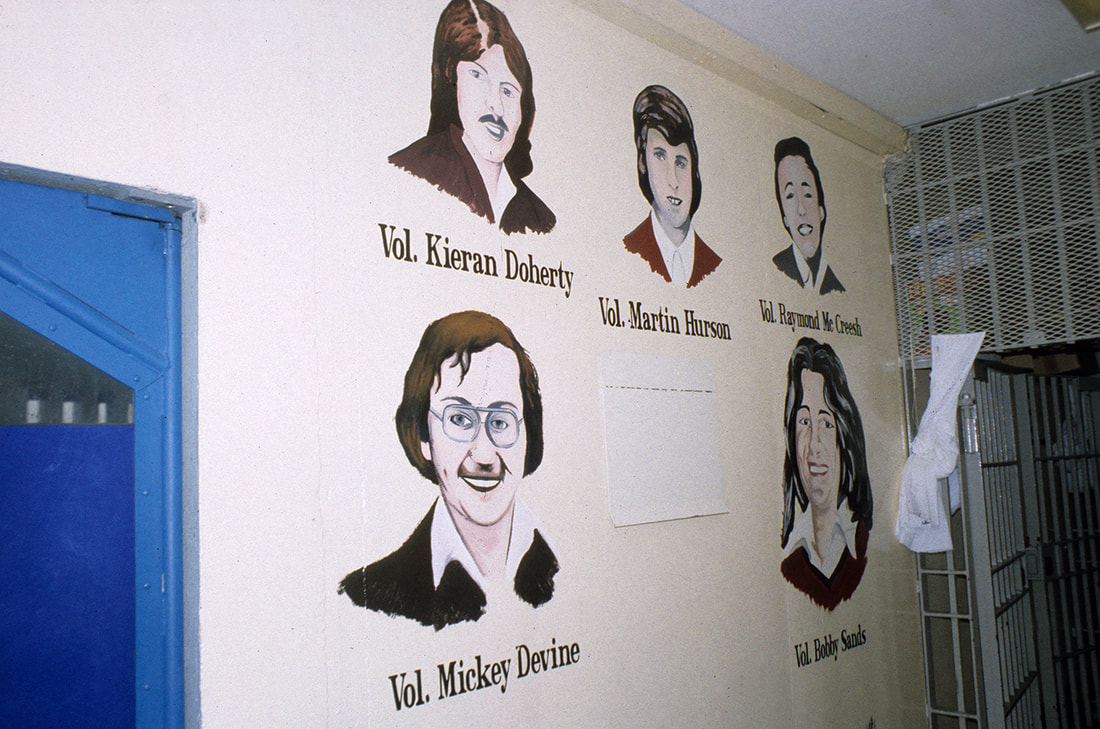 Portraits of five of the ten hunger strikers who died in 1981; mural in IRA wing of Long Kesh. 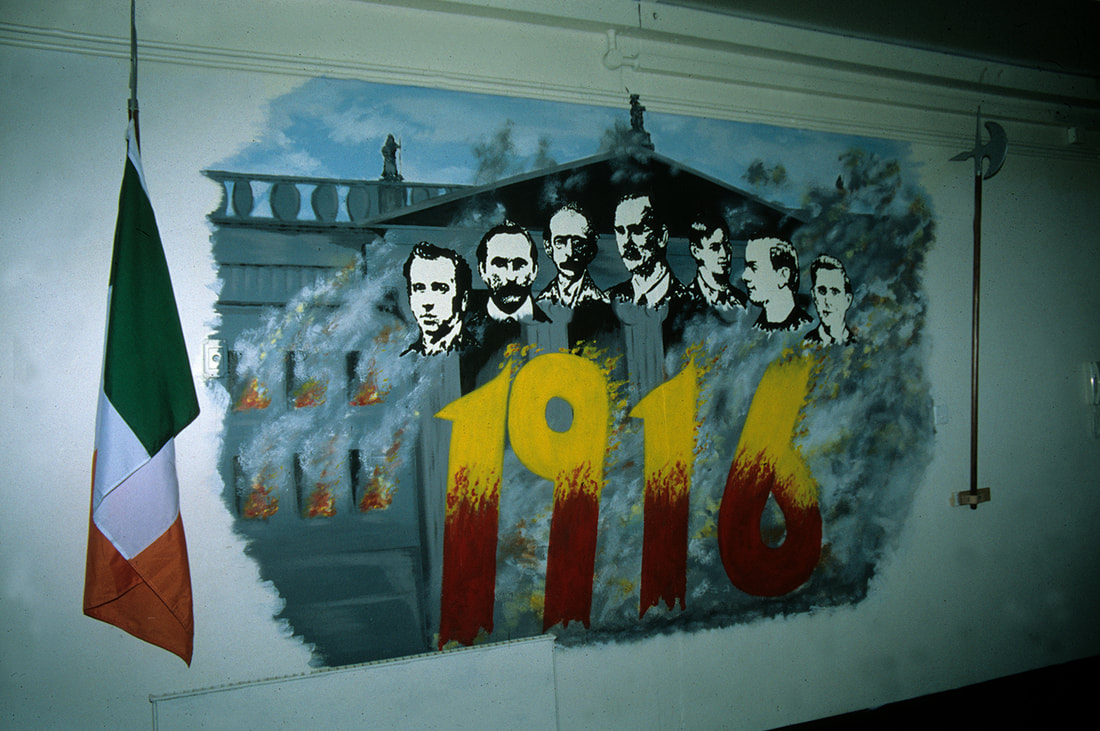 Seven signatories of the declaration of independence, Easter 1916; mural in INLA wing of Long Kesh. 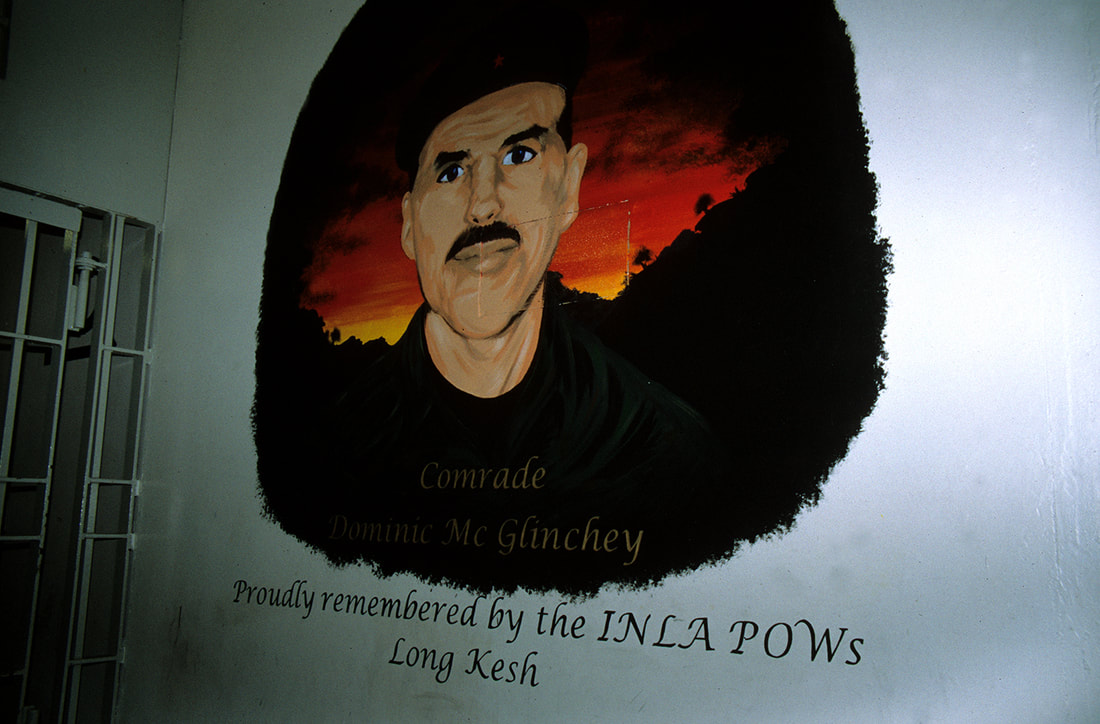 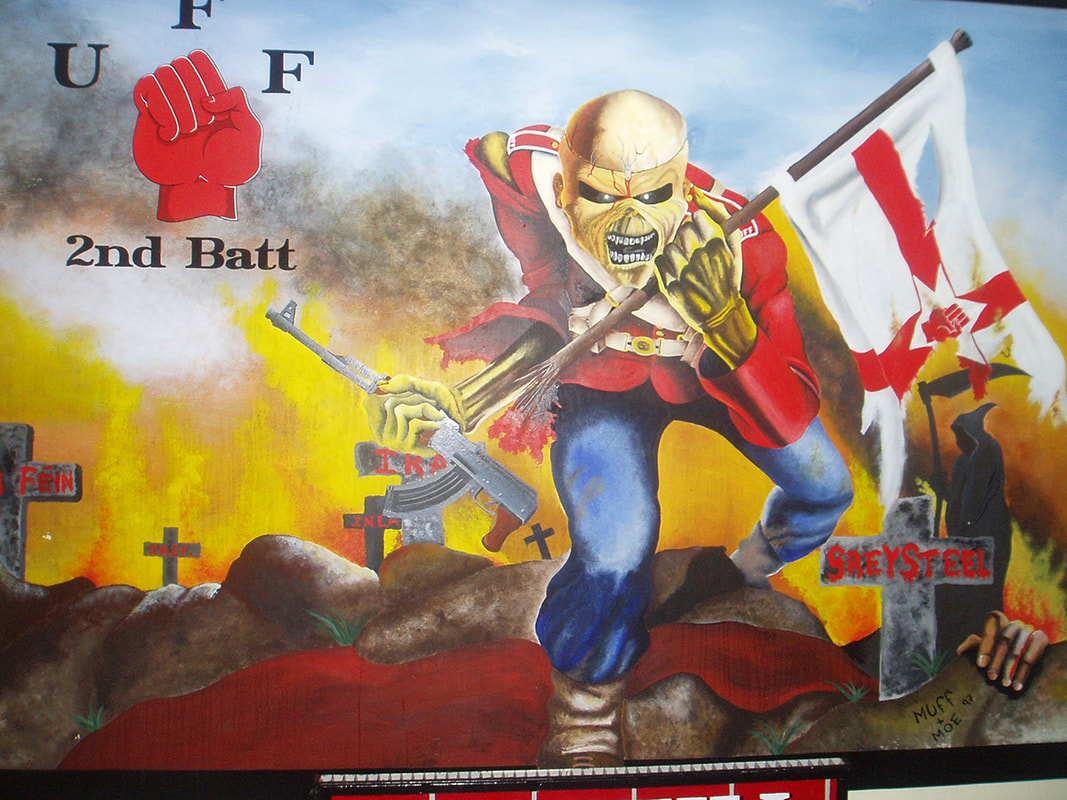 Eddie, the emblem of Iron Maiden, as a loyalist avenger with the Grim Reaper behind him and crosses acknowledging UDA atrocities; mural in UDA wing of Long Kesh. 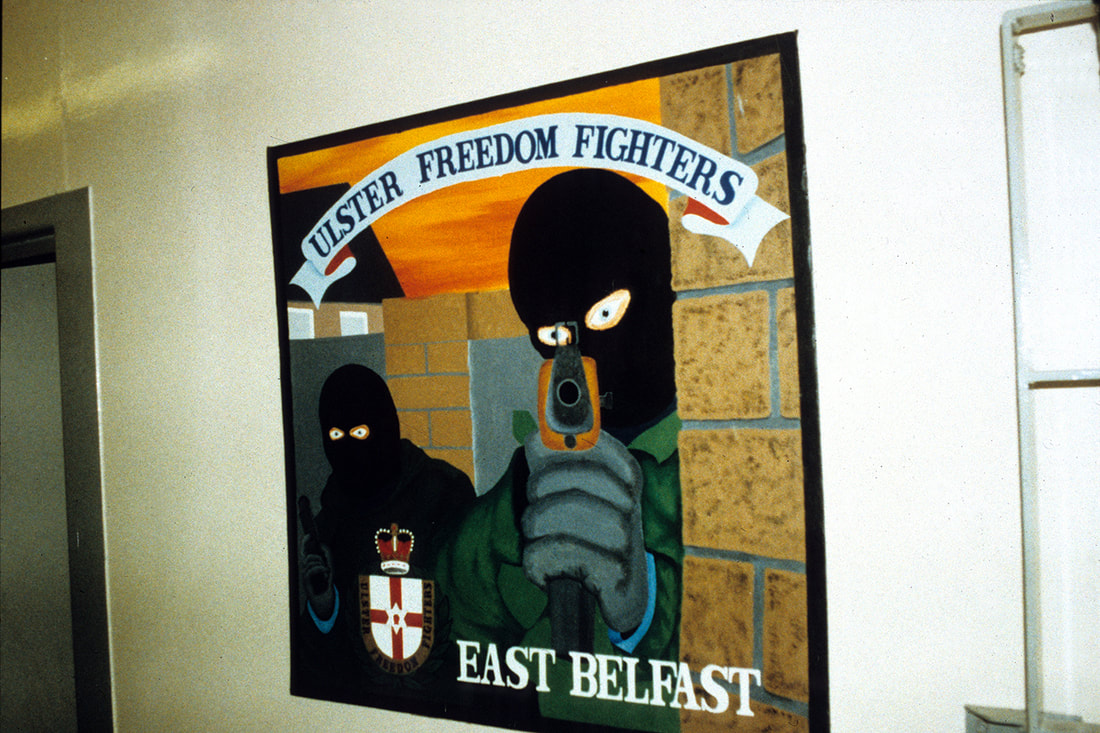 Members of the UFF/UDA in action; mural in UDA wing of Long Kesh. 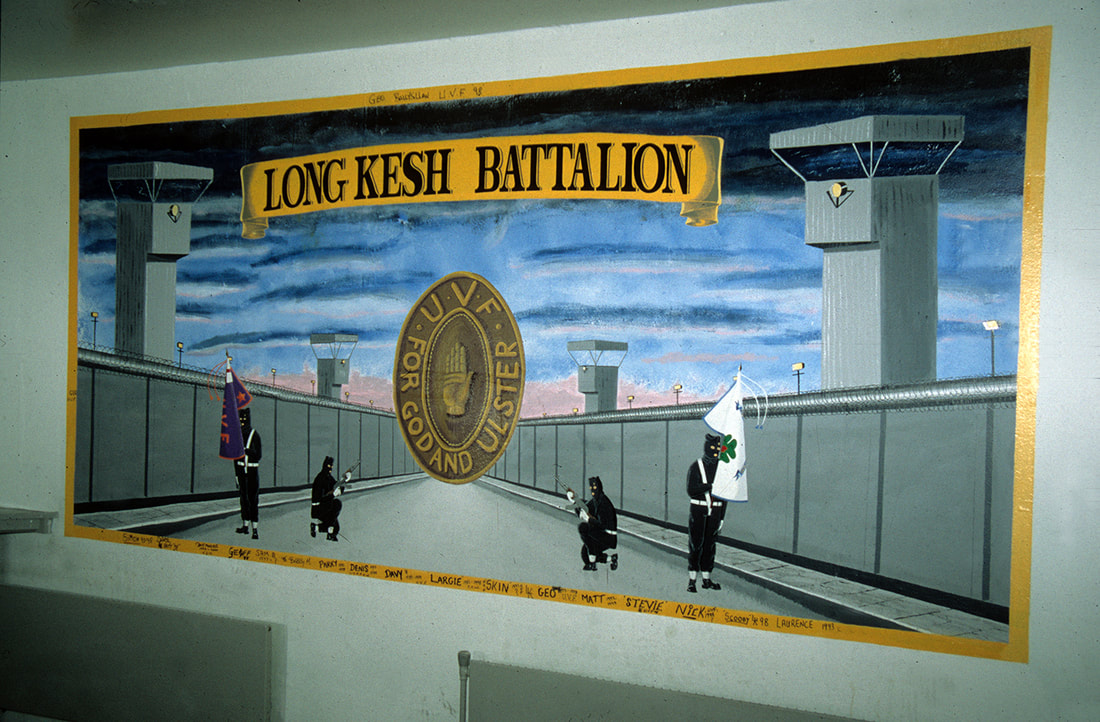 ​Long Kesh Battalion of the UVF within the prison; mural in UVF wing of Long Kesh. 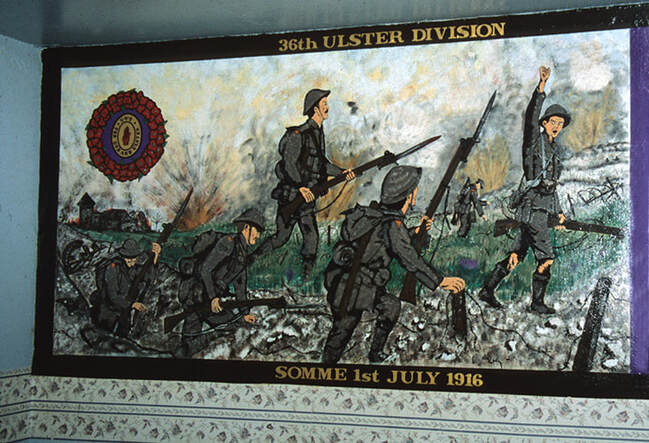 ​The 36th Ulster Division going over the top at the Somme, July 1916; mural in UVF wing of Long Kesh. 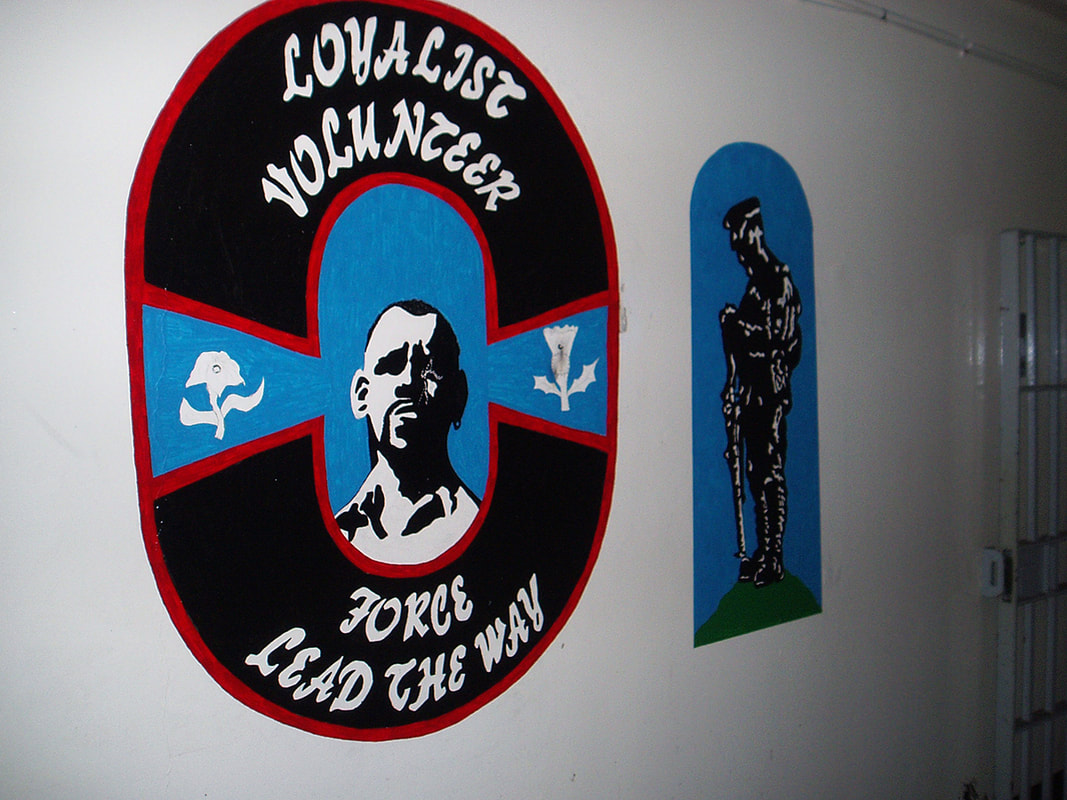 During the 1970s, before the H Blocks were built, prisoners were held in 'cages', Nissen huts from World War 11. Each of the groups painted murals, usually on boards, which were displayed in the 'cages'. Most of these murals were not photographed or the photographs seem not to have survived. The exception is the murals of the UVF. They differ markedly from the UVF murals of the 1990s in the H Blocks. There are references to World War 1 and the role of the 36th Ulster Division and to the prior Home Rule crisis. There are also memorials to dead comrades. But among the other themes are images which would not have been out of place in a Northern Ireland Tourist Board or even an Irish Tourist Board brochure. 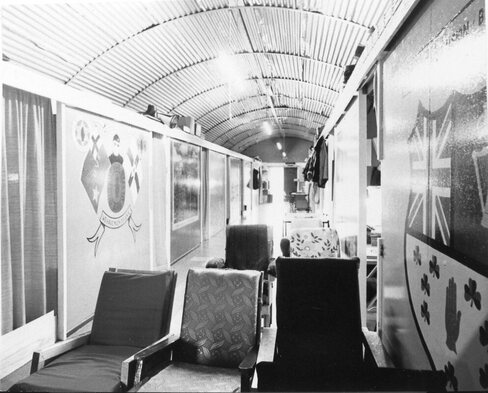 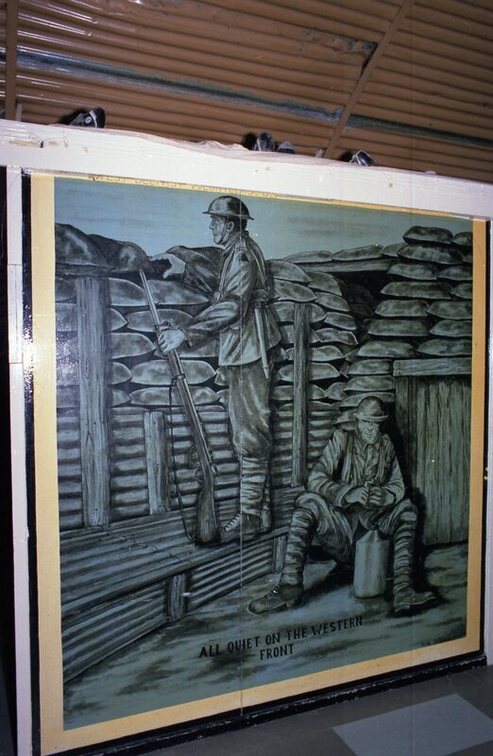 Soldiers in the trenches, World War 1. 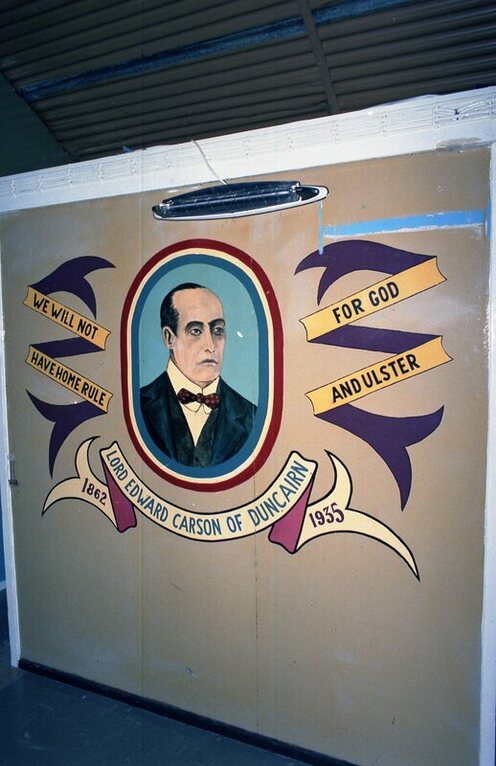 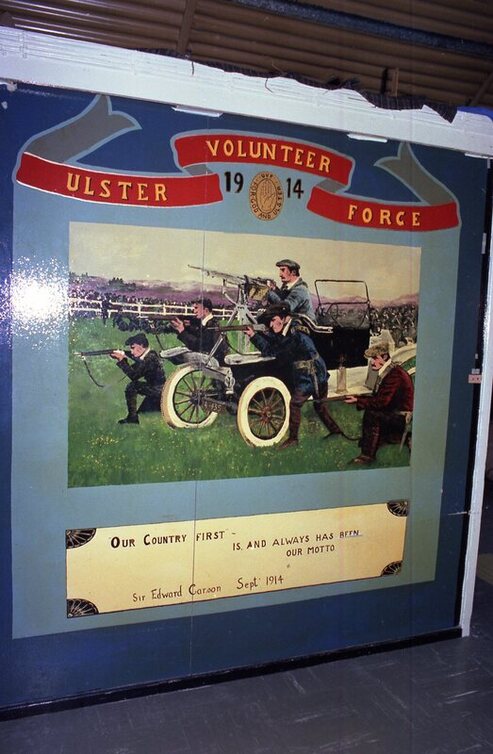 The motorised division of the UVF, organised in opposition to Home Rule. 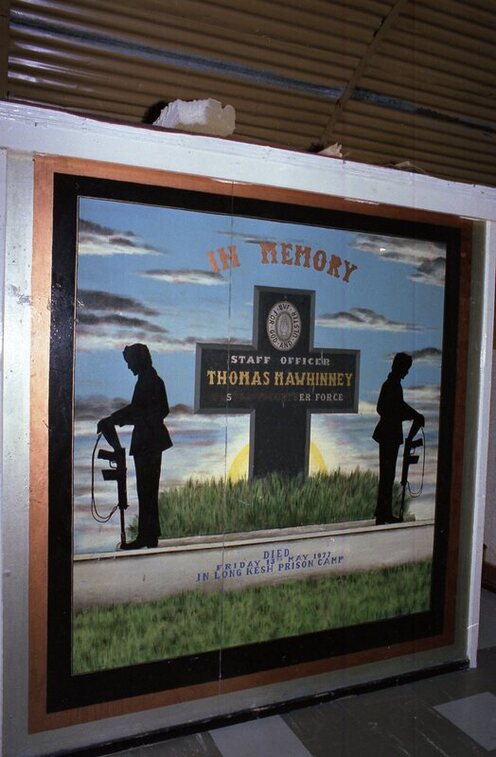 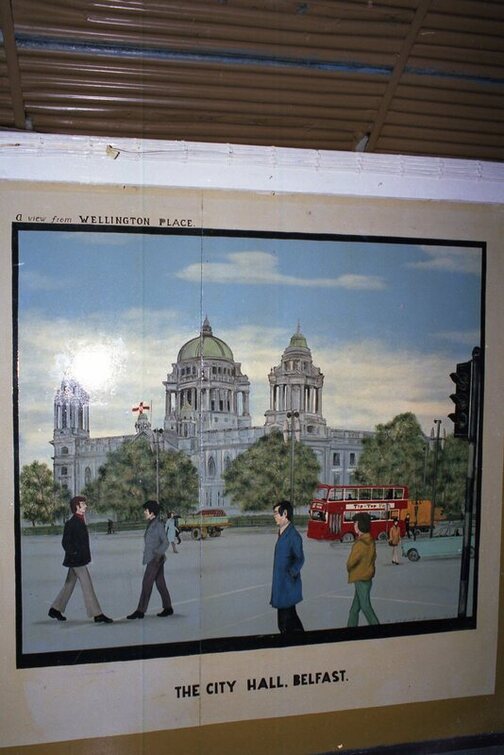 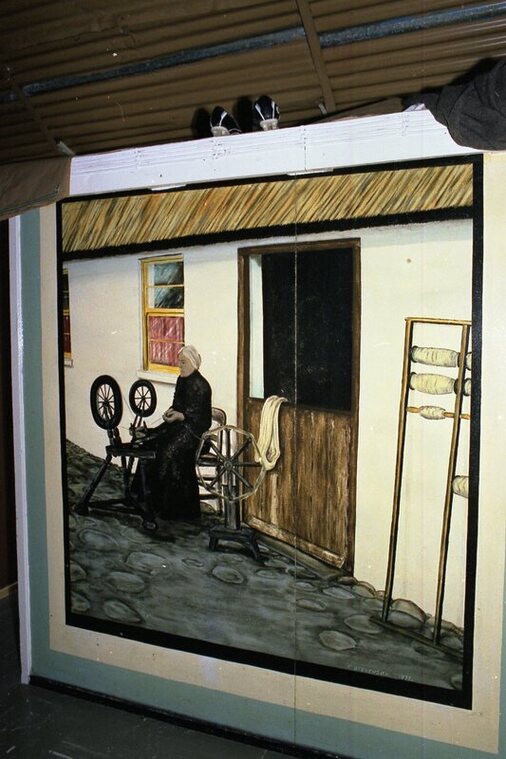 An old woman spinning outside a traditional cottage. 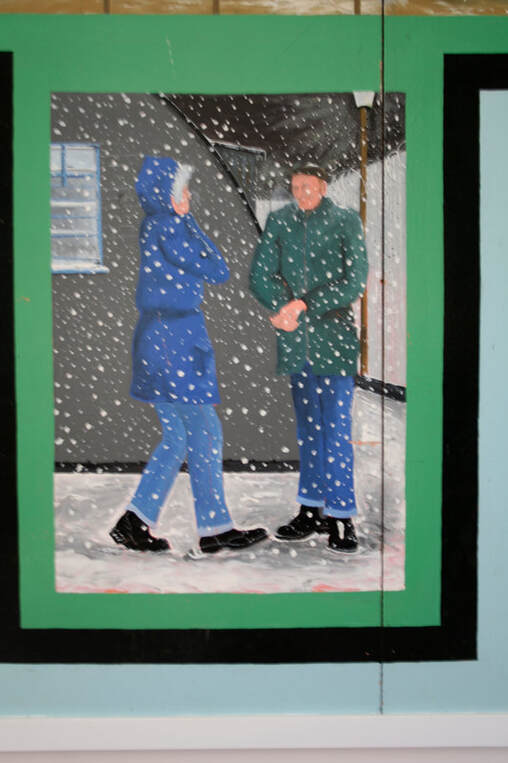